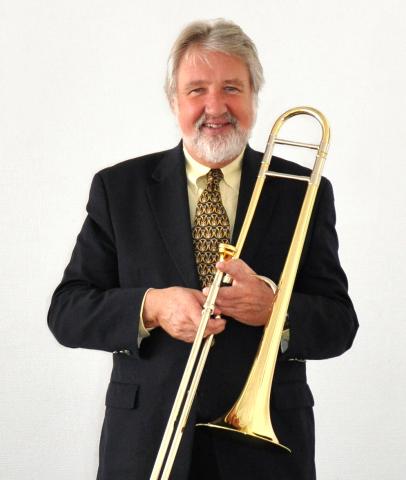 On November 17, internationally acclaimed jazz trombonist Jiggs Whigham presented a day of clinics and masterclasses for the UNT trombone studio, as well as an evening performance at the UNT Union Syndicate, sharing the stage with the UNT U-Tubes, Jason Hausback conducting.  Jiggs' appearance was made possible through the the efforts of the student trombone organization, Trombones At North Texas, along with financial support from Conn-Selmer, Inc. and the UNT Eagle's Nest.  For more about trombonist Jiggs Whigham, check out his personal website here. 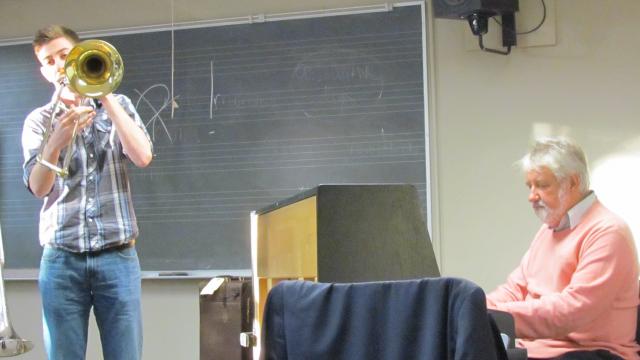 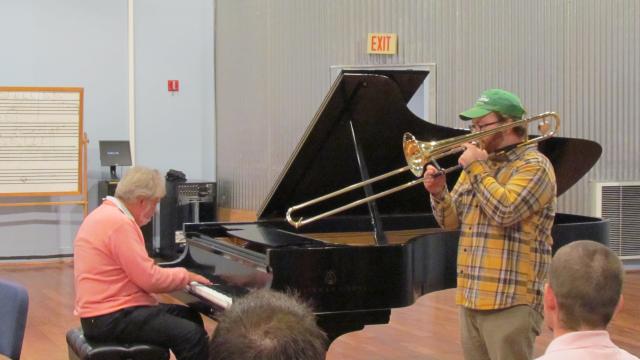 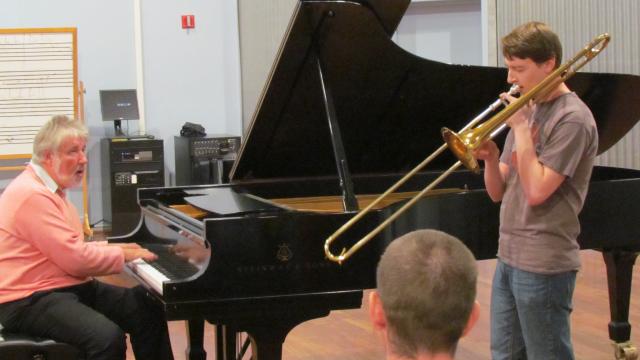 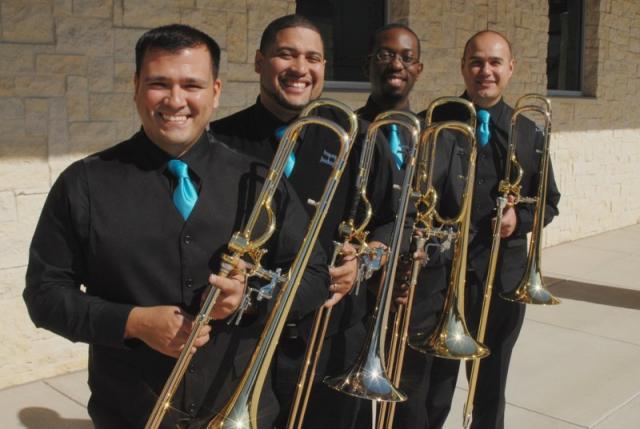 The Minor 4th Quartet presented a guest recital at UNT on Friday, November 4th as part of their Dallas tour. The recital featured the quartet by themselves, as well as selections with special guests Tony Baker, Simon Willats, and Reggie Watkins.

The Minor 4th Quartet is sponsored by Michael Rath Trombones, and all four members hold university professorships in the state of Texas.

Powell and Sasaki perform with U-Tubes

Trombonist Morgan Powell and Trumpet player Ray Sasaki, both alumni of UNT, performed with the U-Tubes on Friday, October 21st.  Powell and Sasaki were here to perform as featured guests for the Floyd Graham Society annual luncheon, and were able to take some time out of their schedule to solo with the U-Tubes, and to discuss their experiences both as students at UNT, and in their careers after that.

For more information about Powell and Sasaki, click the links below: 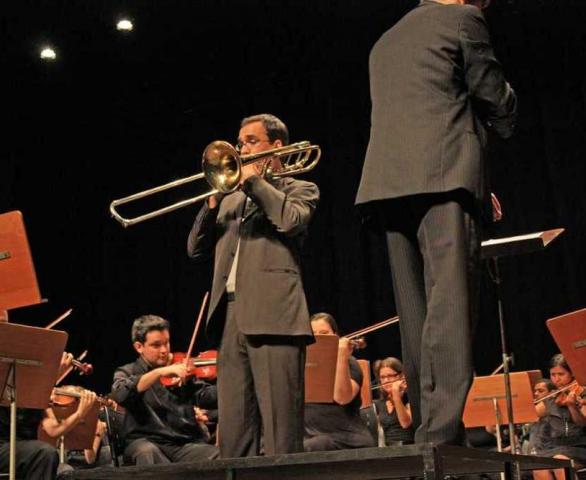 DMA student Lucas Borges was featured as a soloist and as faculty at the II Festival Internacional de Música Erudita de Piracicaba alongside the UNT Center for Chamber Music Brass Quintet.  The Festival occurred in Piracicaba, São Paulo, Brazil between July 16 and July 24. The Center Brass Quintet performed a recital on July 18 at the Teatro Municipal Dr. Losso Neto, and the recital was very well received.

Borges was also a featured soloist with the Festival´s orchestra on Sunday, July 24 on the final concert, where he performed the Ferdinand David Concertino for Trombone and Orchestra.  This performance was also enthusiastically received by the audience.

After the festival the UNT Center Brass continued to tour Brazil, performing and giving master classes in São Paulo, Brasília and Pirenópolis

Maniacal 4 performs at ITF in Nashville 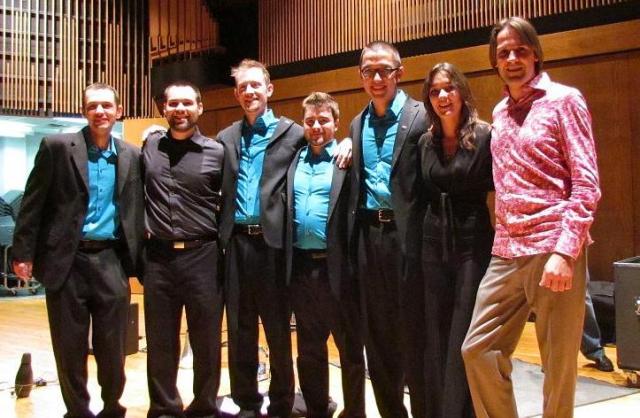 The Maniacal 4 Quartet had the honor of performing at the International Trombone Festival in Nashville this June.  The group performed a recital with professional trombonists Jeremy Wilson and Brandt Attema.  Accompanist Nataliya Sukhina also performed.  The concert was very well received, and the Maniacal 4 was even invited to the next ITF to be held in Paris the Summer of 2012.

Craig Flentge, recent graduate of the UNT Trombone Studio, has just won a position with the Air Force Band of Mid-America.  Flentge, who will be stationed at Scott Air Force Base in O'Fallon, IL (just outside of St. Louis) will be playing bass trombone in the jazz band "Shades of Blue," but will also be expected to fill in for other groups (or on tenor trombone) as needed.  Craig should be leaving Denton and headed to basic training sometime in the early fall.  Congrats to Craig Flentge! 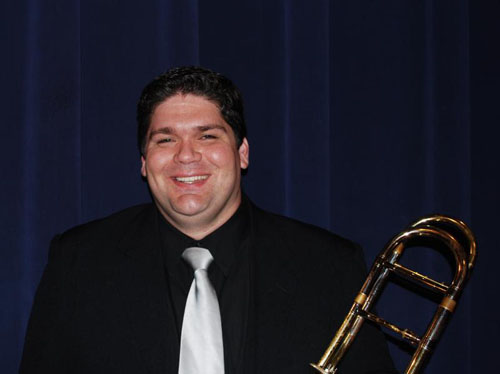 Alumnus Steven Hunter has just been appointed Adjunct Professor of Trombone at Brigham Young University in Provo, UT.  Incidentally, Steven got his Bachelor's degree at this University, and has now come full-circle back to teach.

Steven has also taught adjunct at Utah Valley College and Snow College, both of which are also in Utah.  He is also a member of the Utah Chamber Orchestra, which is the orchestra for the ballet in Utah.  Congrats to Steve 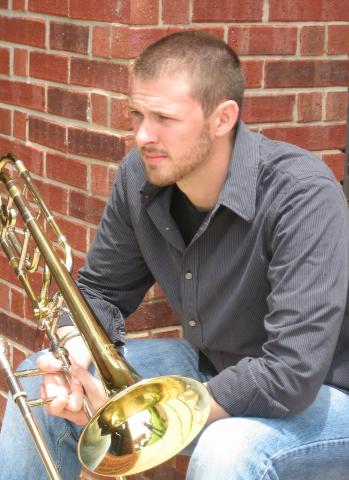 Doctoral student Justin Cook has recently been appointed Adjunct Instructor of Trombone at Tarleton State University in Stephenville, TX.  His duties will include teaching applied trombone lessons as well as conducting the trombone choir and coaching chamber ensembles.

Previous to this appointment Justin was a TF in the UNT trombone studio.  He is also an active educator and freelancer in the DFW area.  Congrats Justin 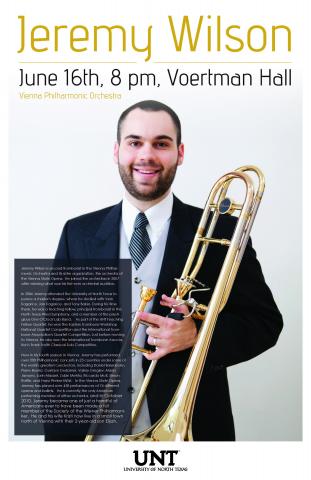 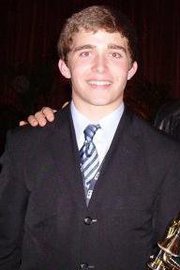 UNT Junior Sean Casey has been selected to perform with the 2011 Disney All-American College Band.  Sean will be at the Disneyland Resort in California for an 11-week paid summer internship, which will include performing daily concerts at the themepark, working with clinicians from the LA professional scene, and learning other valuable professional skills.  Sean was just one of 20 performers selected from over 250 applicants.  Congrats Sean!