- Jeremy Stones: Jeremy is on his second year of his DMA and is now Adjunct Professor at Grayson County Community College (Denison, TX)

- Kyle Mullins: Kyle is also on his second year of his DMA and is now Adjunct Professor at Tarrant County Community College

Congrats to all four of these guys on their new jobs!

Jeremy Stones And Craig Flentge Are Winners In ITA Competitions 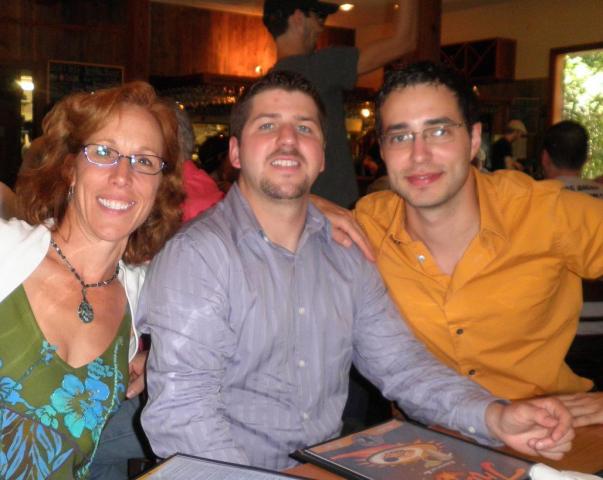 Three days later Craig Flentge, a UNT Master's student, won the Donald Yaxley Bass Trombone Competition.  The other two finalists were UNT students Sean Casey and Jeremy Stones. All three are students of Jan Kagarice. The selection was made by judges Donald Knaub, retired professor from the University of Texas, Stefan Sanders, former bass trombonist of the Buffalo Philharmonic, and Donald Grantham, University of Texas composer of the required piece that was performed.  Congratulations Jeremy and Craig! 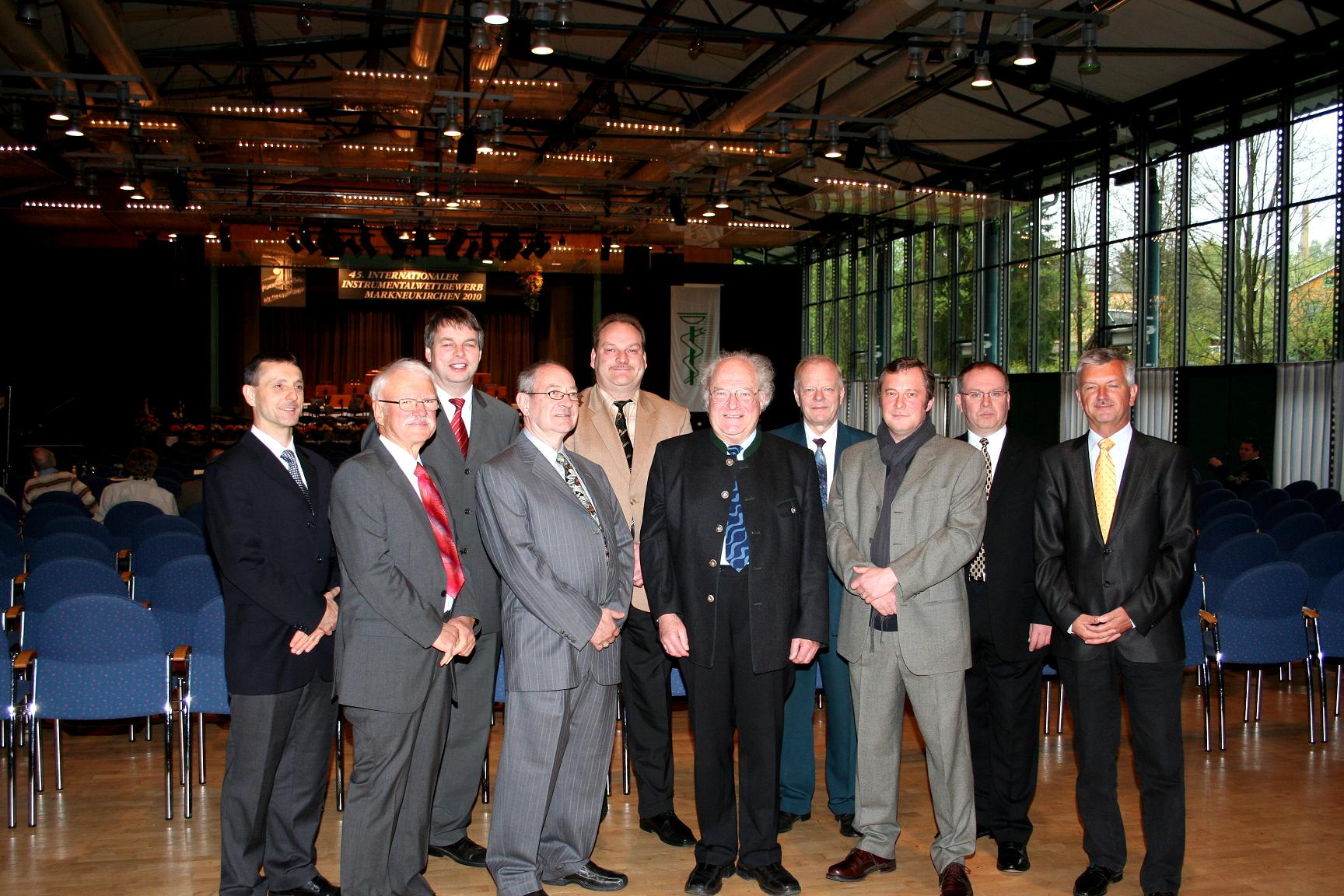 On May 5, 2010, Professor Vern Kagarice flew to Markneukirchen, Germany to serve on the nine-member jury for the 2010 Markneukirchen International Trombone Competition. From May 7–9, 72 trombonists from 26 different countries participated in Round One, each playing either David Konzert or Bozza Ballade, as well as a modern, unaccompanied German solo. Twenty-one players were invited into Round Two, where performances of Guilmant Morceau Symphonique, Sulek Sonata, Stojowski Fantasie, Rabe Basta, Crespo Improvisation No. 1, Martin Ballade, Hindemith Sonate and Peaslee Arrows of Time were heard in 30-minute programs. Round Three was then narrowed to only six players, who played Wagenseil Concerto or Leopold Mozart Concerto and Grondahl Concerto or Tomasi Concerto. Three players advanced to the Final Round, each performing the Rota Concerto with the Voigtland Philharmonic Orchestra.

Although the competition was open to players ages 30 and under, there were numerous success stories of younger players. Most significant was the Second Prize Winner Angelos Kritikos from Greece, who is only 22, and First Prize Winner Karol Gajda from Poland who is only 18. 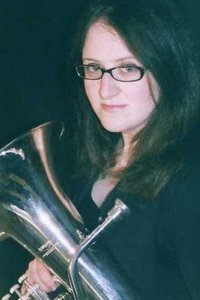 Prior to this job appointment, Jamie was Adjunct instructor of euphonium at Henderson State. In addition to participating in the trombone studio at UNT, she was also a DMA Euphonium student and teaching fellow. Congrats Jamie!

The first annual TWU Pioneer Trombone Day will take place on Saturday, May 1 from
1:30pm-9pm.

Dr. Scott holds the position of Associate Professor of Trombone and Jazz Studies at Stephen F. Austin State University in Nacogdoches, TX. She completed her DMA at UNT in 2004.

Ron Barron, retired principal trombone of the Boston Symphony Orchestra, will present a masterclass at UNT on Wednesday, April 7th at noon in Room 232. Mr. Barron is a native of Texas, and regularly presents masterclasses and performances across the United States.

Windham lands job with University of Arkansas at Monticello

Mark Windham (MM ’06) is the new instructor of low brass and marching band at the University of Arkansas at Monticello. Since 2007 Mark has served as Director of Bands at Paul Pewitt Jr. High and High School in Omaha, TX. 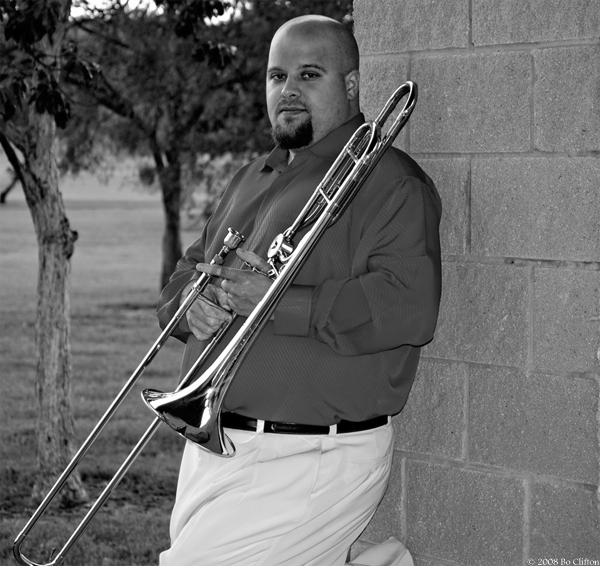 Bo Clifton (MM’ 06; DMA student) is the new Director of Marketing for Background Brass with Conn-Selmer, Inc. Bo was offered this position after a thorough search and interview process. Bo has this to say to the UNT trombone faculty: “A heartfelt 'Thank you' to all three of you; you helped me to get where I am today.”

From 2006 to 2008 Bo was the trombonist of the Synergy Brass Quintet and has been an active teacher and performer in the Dallas/Ft. Worth metroplex since his return to the region. Bo was also the recipient of the 2008 Priddy Charitable Trust Fellowships in Arts Leadership and is a Conn-Selmer performing artist. While we’re unhappy to see Bo leave UNT, we wish him the best and know that he’ll do a great job at Conn-Selmer. Way to go, Bo

Alumnus J. Walter Hawkes (BM) received a Daytime Emmy Award in the category "Outstanding Achievement in Composition and Music Direction" for his work on the animated series "Wonder Pets" on Nickelodeon. Coincidentally, this is the second Emmy Hawkes has won (the other was in 2008 in the same category and for the same show).

Walter's trombone playing was featured on the Norah Jones release "Not Too Late" (Blue Note) and he was featured with Ms. Jones on the TV show "Austin City Limits." Hawkes also was awarded a 2009 fellowship at the Virginia Center for the Creative Arts. Congratulations to Walter Hawkes!