Former trombone soloist with the UNT One O'Clcok Lab Band and student composer Sara Jacovino has been chosen as the 2009 recepient of the prestigious Sammy Nestico Award. The Top U.S. Air Force Jazz Ensemble, The Airmen of Note, will produce a professional quality recording of Sara's piece and perform the composition during the Jazz Heritage Series in Washington D.C. Additionally, Sara will be flown to Washington, D.C., for the performance and will receive a $2,000 follow on commission for a second work. Congrats Sara!

From the blog of Steve Wiest

Viento Sur to perform in Denton

The Viento Sur Trombone Quartet from Argentina will be performing a concert on Tuesday, October 13 at 7:30pm. This concert will take place at the Margo Jones Performance Hall on the campus of Texas Woman’s University. This is a world-class trombone quartet that has been featured at events such as the Eastern Trombone Workshop and the International Trombone Festival.

In addition to having recorded two compact discs, this group has toured extensively throughout the United States and South America. This is a rare opportunity to hear one of the top performing trombone ensembles today.

*For those of you who would like to purchase tickets in advance of the concert instead of at the door, you may do so by check. Please make checks payable to 'UNT Trombone Projects' and mail them to the following address:

Please indicate in the memo section of the check how many tickets you would like to order. Also, please make sure we have your advance ticket order by October 9. Your tickets will be available at the Will Call table prior to the concert.

If you have any questions about this event, please don’t hesitate to contact Tony Baker (tony.baker@unt.edu) or Noel Wallace (nwallace@twu.edu). 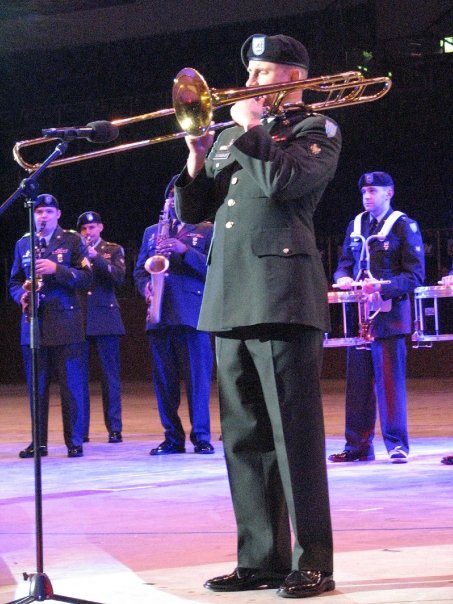 Phil Bleinberger (BM '04; MM '06) is currently a member of the US Army Europe Band based in Heidelberg, Germany. His main job is playing in the Rhine River Ramblers, which is a Dixie/Brass band, as well as the Soldiers of Swing, a big band. Most recently he performed as a soloist with the concert band which he said "was a nice change of pace."

Recently Phil took some time out of his schedule to talk about his job:
"The playing opportunities in this job have been extraordinary and the number of people that I have played for is something I never thought I would have the chance to do. I have gotten to play for some really high profile events but the most recent and I think exciting was playing for the 65th anniversary of D-Day in Normandy. That event included performing for an enormous audience which included the heads of state of France, Canada, Great Britain, and of course, the USA. This event was also broadcast live on CNN and other networks so it was pretty exciting."

"Living in Europe is a dream come true for my wife and I. Before I left Denton we were trying to figure out how I could just play trombone for a living and she could teach overseas and we wouldn't starve. Joining the military and having the opportunity to live over here for a total of five years is giving us the chance to travel and experience new things everyday. In the two years that my wife Anna and I have lived here we have been to Italy, Spain, France, Belgium, The Netherlands, England, The Czech Republic, Austria, Switzerland, Litchtenstein, Turkey, Macedonia, Albania, Croatia, Bosnia, Kosovo, Lithuania, Latvia and Estonia. If that is what we have seen in just two years I can't wait for the next three." 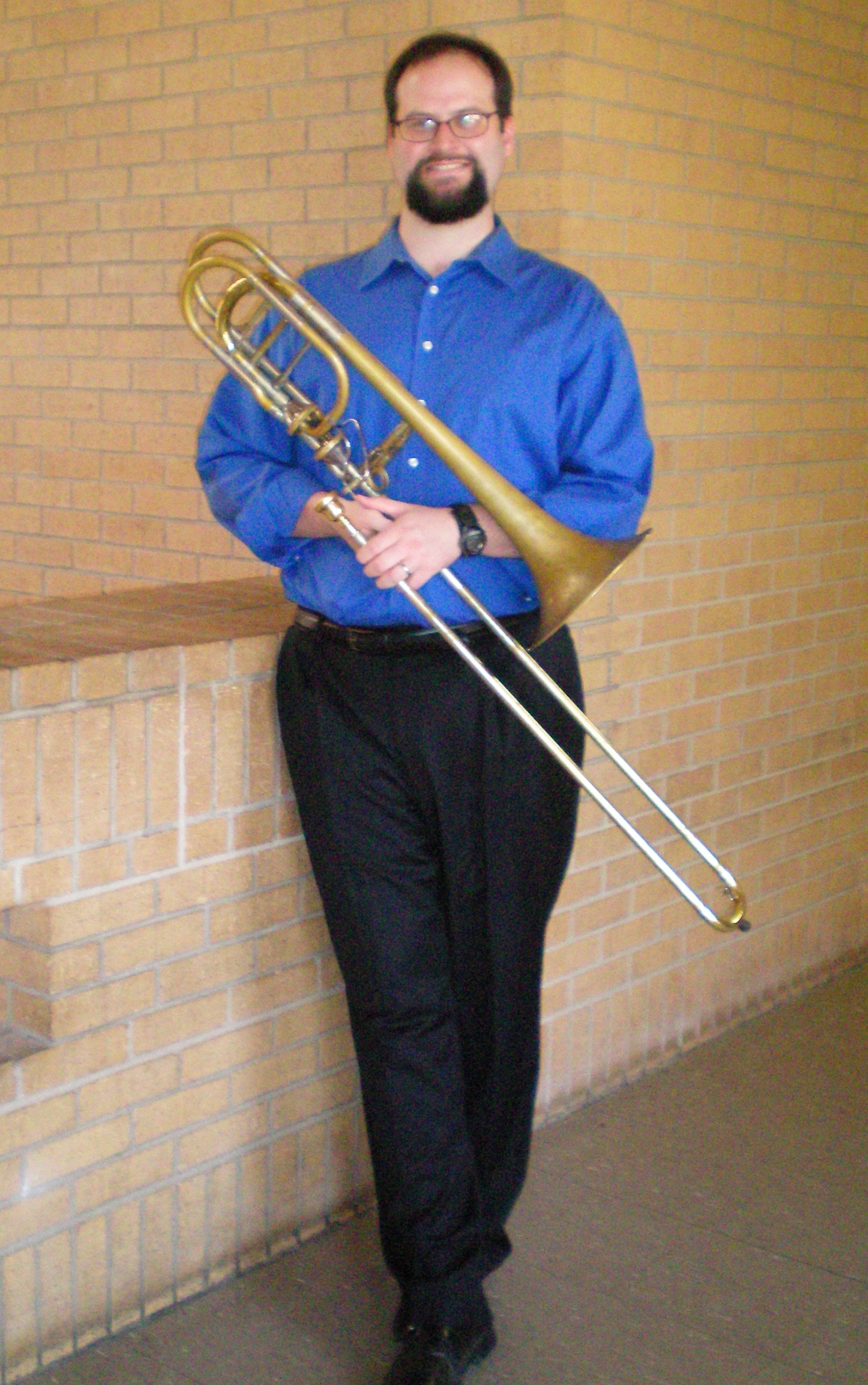 UNT doctoral student Noel Wallace has recently accepted positions as Adjunct Professor of low brass and Director of the jazz ensemble at Texas Women’s University and Adjunct Professor of trombone at Brookhaven College. Noel has served as a teaching fellow for the UNT trombone department for four years and most recently has completed his course work for the DMA. He hopes that his performing and teaching experience will help build strong studios that will benefit the students of TWU and Brookhaven College. Noel holds degrees from the Eastman School of Music, Penn State University and a Certificate from the Rotterdam Conservatory in the Netherlands. 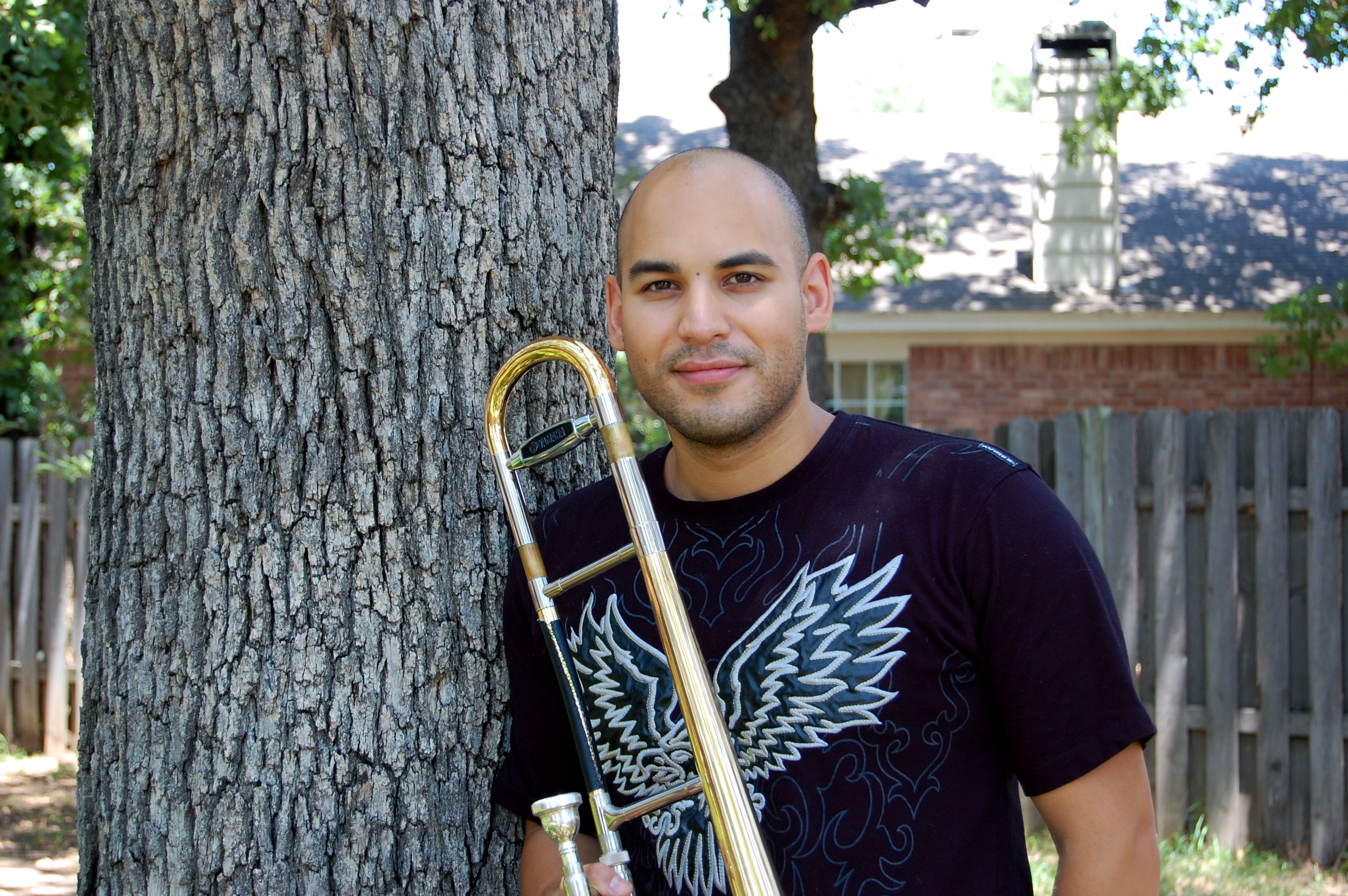 UNT alumnus Victor Barranco has just won the 3rd trombone spot with the U.S. Army Blues jazz band. After a long and multi-round audition involving 12 contestants, Victor emerged victorious. Victor had been working on a doctorate at UNT until he got the opportunity to go on the road with Fiddler on the Roof show earlier this year. Congratulations to Victor on his new job!

The Army Blues is located in Ft. Meyer, VA, and is one of the premiere jazz bands of the U.S. military.

UNT trombonists once again made their mark on the international scene at the International Trombone Festival in Aarhus, Denmark on June 25-28, 2009.

Carl Lundgren, Nick Laufer, Alex Dubrov and Matt Jefferson--known as the Maniacal 4 Trombone Quartet--won the first prize in the International Trombone Quartet Competition, making it the third consecutive year in a row that a UNT trombone quartet has been the winner. The judges, Pierre Volders from the Rotterdam Philharmonic, Mogens Andresen from the Royal Danish Brass Ensemble, and Michael Davis, NY recording artist described the competition as intense, but unanimously selected Maniacal 4 as the winner. Alex Dubrov's solo in the Cantiga Brasileira was so beautiful that he make some audience members cry! Way to go, Alex. Jan Kagarice's untold hours of intense coaching both in Texas and in Sweden shortly before the competition was incredibly helpful to the M 4 success.

Kyle Mullins, student of Tony Baker (and a little bit with Vern and Jan) was a double winnner. His performance of the Holmboe Concerto in the Frank Smith Competition was as impressive as it was flawless. The judges, Carsten Svanberg, Jesper Juul (both Danish) and Alex Iles, were extremely complimentary of Kyle's tone, strength and musicianship.

Mark Scott, a 2008 UNT grad now at the University of New Mexico, was the runner-up. UNT 2007 graduate Jeremy Stones was also one of the three finalists in the Donald Yaxley Bass Trombone Competition.

Kyle was also the winner of the Lewis Van Haney Philharmonic Prize Tenor Trombone Competition. The judges, John Marcellus from the Eastman School of Music, Mogens Andresen from the Royal Danish Brass Ensemble and Jesper Juul, from the Danish Radio Orchestra, were again unanimous in their selection, noting that it was his performance of the solo piece, the John Kenny Fanfare, that helped set him apart from the other competitors. 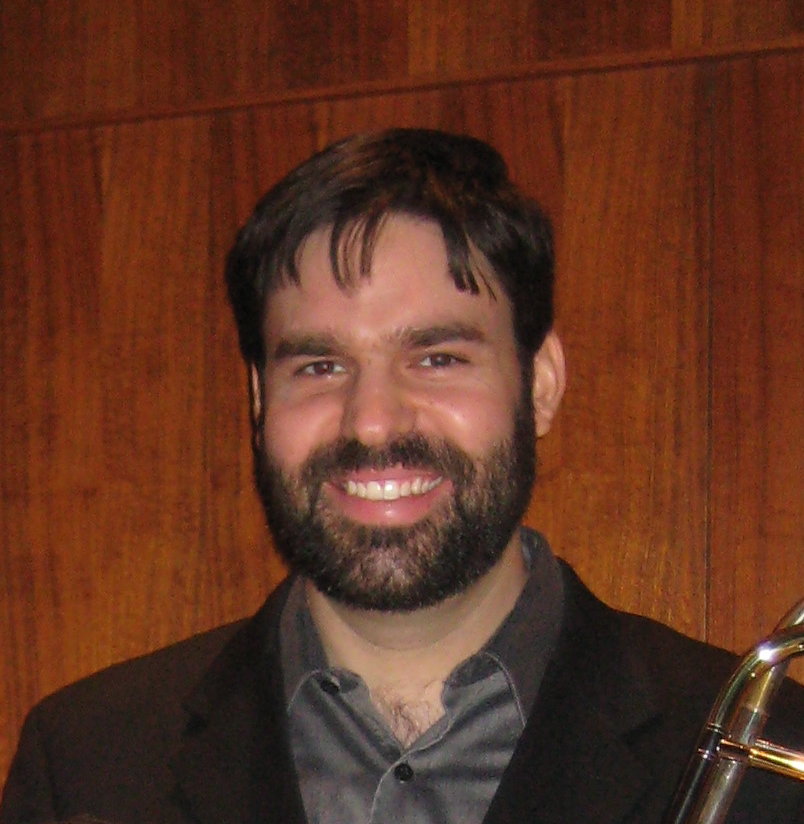 Donny Pinson, who recently completed his DMA at UNT, has just been appointed to the trombone faculty at Del Mar College in Corpus Christi, TX. Donny brings a wealth of performance and teaching experience to his new job. He also holds degrees from Texas Christian University and Southern Methodist University. Congratulations and good luck Donny!

The following people have indicated their intent to accept the invitation to join the UNT Trombone Studio for the fall of 2009. We extend a warm welcome to the following: 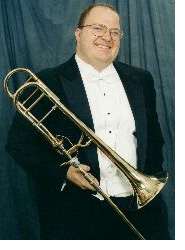 David Begnoche, UNT doctoral student, has just been appointed to the tenure-track trombone position at Texas Christian University in Ft. Worth, TX. He brings a wealth of professional playing and teaching experience to the TCU program. Dave is a member of the Stentorian Consort, and was a recent recipient of the Priddy Fellowship in Arts Leadership. Congratulations and best wishes to Dave as he builds a strong studio. 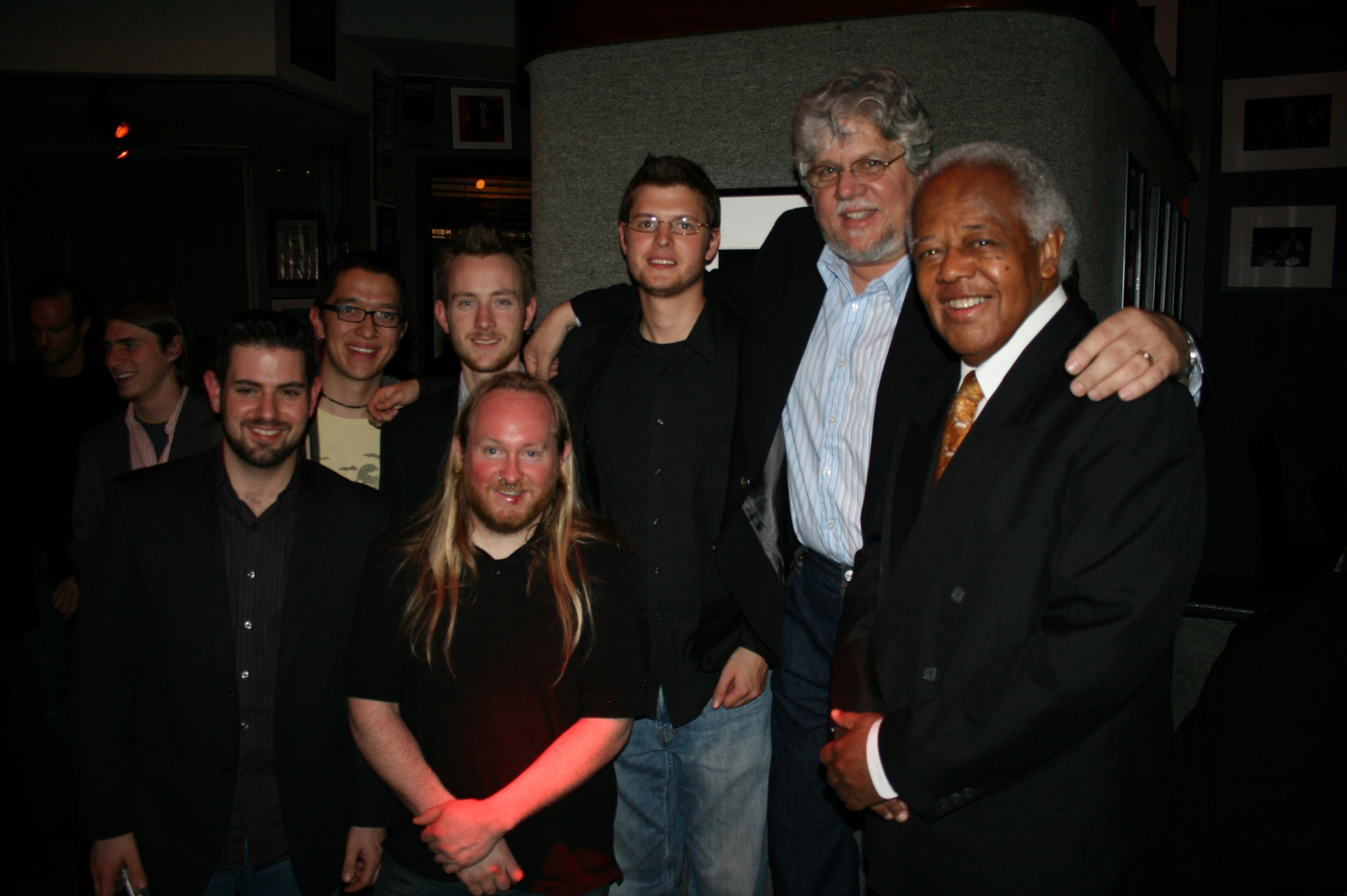 The UNT One O'Clock Lab Band recently took a trip to New York. On Tuesday, March 10th, the band played at the renowned Birdland jazz club, which Charlie Parker once called "the jazz corner of the world." At that performance, the band played a piece called "Newport," which "Slide" Hampton had written back in the 60's and which Dave Richards adapted for the 1 O'Clock Lab Band. "Slide" himself was in attendance, and the trombone section got to meet and talk with him afterwards.