Thank you for reading! We have enjoyed an exciting and eventful few years since our last blog post! We will be discontinuing the blog and using our facebook page for news, events and studio highlights. Check us out there for the latest and greatest of the UNT Trombone Studio!

Look Who's Coming to UNT

The UNT Trombone Family would like to welcome the newest editions to our studio:

We look forward to meeting and working with you all soon! 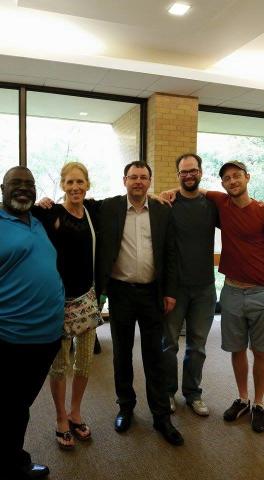 UNT was privileged to host Brett Baker during his latest USA tour.  Bringing his customary trombone fireworks and British sense of humor, Mr. Baker entertained the trombone studio during a recital where he was accompanied by Dr. Steve Harlos.

The following biographical information is taken from Mr. Baker's website:

Brett Baker is viewed internationally as a leading brass performer and educator. He is passionate about encouraging composers to write pioneering new solo repertoire having commissioned 100 compositions. Brett is a clinician for Michael Rath Brass Instruments, Programme leader for Music at the University of Salford, Past-Principal Trombone of Black Dyke Band, a Past-President of the British Trombone Society, Chairman of the Awards Committee for the International Trombone Association, and Editor of Glissando Magazine.

Brett has performed with celebrated singers such as Alison Goldfrapp and Hayley Westenra, as well as other world-renowned soloists Bousfield, Wycliffe Gordon, Christian Lindberg and Joseph Alessi. He is currently the most recorded trombone soloist in his genre, and as well as making numerous broadcasts and TV appearances. He is also a former Trombone Solo Champion of Great Britain and an Associate of the Royal College of Music, London. Brett’s area of research includes trombone solo repertoire, instrument design through modular arrangement and the psychology of performance. He has produced 25 solo CDs, 6 under his own label of White River Evocations, two sheet music solo albums with Kirklees music and published many arrangements with Studio Music.

The U-Tubes were recently selected winners of the ITA's Kai Winding Competition (see u-tubes-wins-ita-kai-winding-competition for more details).  As a result they have been invited to play at the the International Trombone Festival in Spain this year.  A fundraising campaign is currently underway to support them in this prestigious endeavor.  Those wishing to donate can do so by following the link below:

The UNT trombone studio is pleased to announce that Dillon Garrett has been selected to participate in this year's Betty Carter Jazz Ahead residency at the Kennedy Center. Dillon will be in Washington, D.C. from March 23 to April 3 to complete his residency.

For those of you who are not familiar program, this is a HUGE deal for an aspiring jazz musician. Alumni of this program include Michael Dease, Jenny Kellogg and Sara Jacovino. In addition, three other UNT students have been chosen to participate in this year's residency: Drew Zaremba - Saxophone, Amanda Eckery - Voice and Matt Young - Drums.

Please congratulate Dillon and his fellow program participants when you see them! Way to go, Dillon!

This accomplishment is due in no small part to the outstanding leadership of Julie Gray, a teaching fellow in both the trombone and jazz studies areas. She has more than ably maintained and raised the high standard that has always been a feature of this ensemble. Of course, this achievement would not have been possible without a stellar lineup of players. They are:

This is the second time the U-Tubes have won this prestigious international competition, having also won in 2008. This win took them to the University of Utah in Salt Lake City, where they made a huge splash and firmly established themselves as one of the finest jazz trombone ensembles in existence. They will undoubtedly prove that this is still true in Spain. Way to go, U-Tubes!!

We at UNT wish to express our sincere thanks for the sympathy and support that has been show to Vern's family and studio during this difficult time.  Any who wish to watch Vern's "Celebration of Life" memorial service which took place September 28, 2014 in Chautauqua, New York may do so by clicking here.  The program for the service can be found here.

If you would like to share a Vern-ism, pun, memory, or send well-wishes, you can do so by clicking this link which will take you to the studio condolence book . 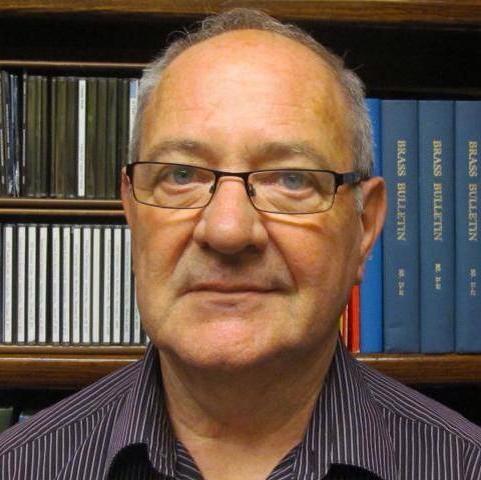 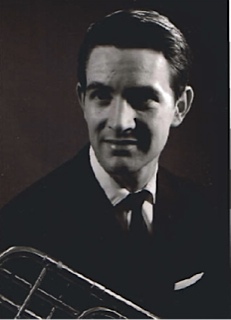 On Monday September 15, 2014 Vern Kagarice, musician, mentor, and friend to so many people, lost his battle with cancer.  Vern's loss is deeply felt throughout the trombone community, but perhaps nowhere more keenly than here at UNT. Several memorial concerts have been planned, including a tribute by Tony Baker as a guest soloist with the UNT Symphonic Band.  Students have placed flowers and mementos in front of Vern's office, as well as joined together several times as a studio to remember Vern, his famous stories, and of course his infamous puns.

The studio has set up a group on Facebook so that those wishing to share photos, stories, or well-wishes for his family and students can do so.  If you wish to view or contribute to our memorial please visit our memory book. You may also view and post pictures through our facebook group.

For those who are interested, we have included Vern's obituary and memorial arrangements below.

The UNT trombone studio recently recorded a greeting to send to trombone professor Vern Kagarice who unfortunately is unable to join us this semester.  Vern is currently battling cancer and is supported in the fight by his wife Jan.  Their absence at UNT is sorely felt by all and so by way of encouragement Tony Baker arranged an impromptu recording session of "Inveni David" by Anton Bruckner arranged by Arno Herrmann.  Nearly 50 trombonists were able to attend ranging from DMA to freshman.  While not everyone was able to make the recording session, all of us here at UNT send our best wishes and support to Vern and Jan during this difficult time.  We love you Vern!!! 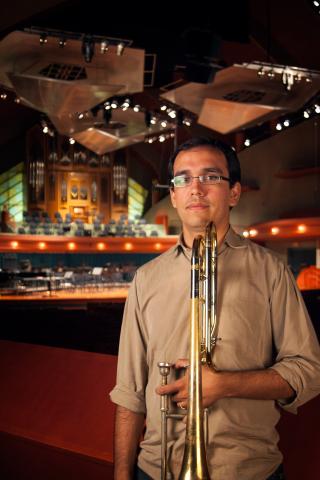 It is with a great deal of excitement that the UNT studio announces that Lucas Borges has recently accepted the position of trombone professor at Ohio University in Athens, OH.  He has been an outstanding TF for us during the past four years, and we're confident he will do a fantastic job in his new position. Ohio is lucky to get him. During his tenure at  UNT, he studied with Vern  for three years, Tony for one year, and  received extensive teaching guidance from Jan over his entire four-year tenure at UNT,  making it a complete team effort.